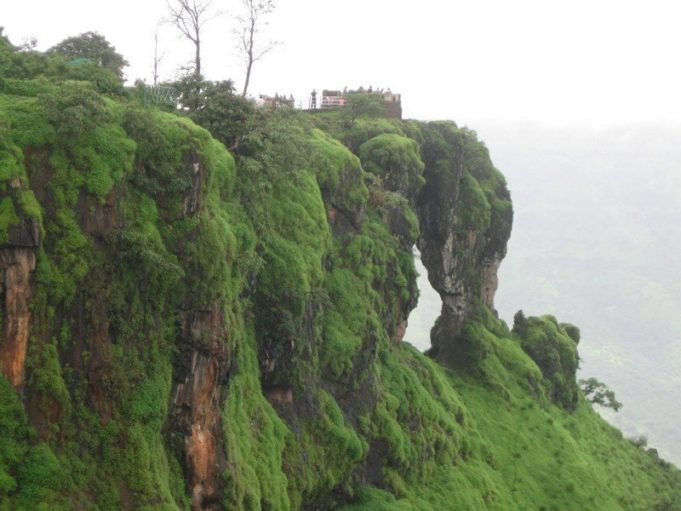 Nasik
Nasik, also known as Western Kashi (Benaras), holds great importance as a sacred place and an industrial and trade centre since thousands of years. Eulogised in the Holy Scriptures for its power to purify a human being of his or her sins, Nasik is the place where the Hindu god Rama’s superhero brother, Lakshmana, hacked the nose of demoness, Surpanakha’s nose, when she dared to attack Rama’s wife Sita. After you are done exploring the the eye-catching wooden architecture, faith-provoking temples, bathing ghats, vineyards and relatively clean surroundings in Nasik, the city life can at time get a bit too boring. And as the wise ones say, the less populated (and polluted) a place, the more tranquillity you will find. For city folks in Nasik and even the tourists, the famous hill stations around Nasik are the best bet to serve the purpose. Read ahead to find out the suggestions we have in store for you.

Mahabaleshwar
You don’t have to head too far to find a worthwhile vacation spot. Mahabaleshwar, which translates into Hindi as the “God with ultimate power”, is a vibrant getaway to check out. It is also home to the ancient Krishna River that flows across Maharashtra, Karnataka and Andhra Pradesh. It’s easily accessible from Nasik and drivable from many nearby towns and cities.

Walk or drive to the Kate’s Point to get a view of the Dhom and Balakwadi dams. Don’t miss the Needle Hole point where a natural hole in between its rock formation shall amaze you. Wilson Point, which is the highest point of the hill station, and Connaught Peak, the second-highest peak in Mahabaleshwar are also tourist-favourite locations. Other must-visit spots are Monkey Point, Carnac Point, Falkland Point, Helen’s Point, Elphinstone Point, Mumbai Point, Marjorie Point and Babbington Point. Go boating at Venna Lake and make sure to visit the Lingmala Falls and Dhobi Falls if you happen to visit the town in monsoons. Whatever you do, don’t forget that a good trip always ends by gorging on fresh home-grown strawberries (or strawberry ice cream) with cream.

Lonavala and Khandala
The twin hill stations of Lonavla and Khandala may attract a lot of city dwellers from Pune and Mumbai, but even the residents of Nasik and around find it too hard to resist vacationing here on a weekend. Both Lonavla and Khandala has a lot of locations or spots that will keep you engaged until the day end. It’s also home to several beautiful valleys and hills, and the divine ‘chikki’ and fudge! Rajmachi Point, about 6.5 kilometres from Lonavla, is the vantage spot for getting the best view of Chhatrapati Shivaji’s famous fort, Rajmachi and the beautiful green valley enclosed it. Drop by Ryewood Park in Lonavla for picnic and also offer prayers to Lord Shiva at an old temple dedicated him in the park. Make it to Valvan Dam, Tiger’s Leap, or Duke’s Nose for extensive views of the region. Duke’s Nose, located about 12 kilometers from Lonavla, is a big hit among hikers. The name of the cliff has come from the generous nose of Duke of Wellington.

Panchgani
You probably know as a beautiful hill station in Maharashtra, but the Western town has a lot more to offer than just pleasant climate and beautiful views Founded during the British regime by a superintendent known as John Chesson, Panchgani was meant to serve a “retirement home”, but soon its reputation as a place of unsurpassable beauty spread far and wide in India. It has seen resurgence as a vacation spot since the last fifty years. Panchgani offers attractions Dhom Dam, the second highest volcanic plateau in Asia named as ‘table land’,Sydney Point, Parsi Point and Devil’s Kitchen.

Matheran
Despite being Asia’s smallest hill station, Matheran has rapidly become one of the Maharashtra’s best places if you are yearning to breathe in untainted air. Especially thanks to strict regulations regarding entry of vehicles in the interiors of the station, Matheran has dirt and pollution-free environment. Therefore, heading here for a vacation is worthwhile. If you’re into good food, this is the place for you. Tourists park their vehicles at Dasturi for a fee before entering Matheran and to either walk or hitch a horse ride before soaking in the rolling landscapes of the town o n their way. Charming homes, hotels, markets and other entertainment points are present in this region. Reach here via a mini-train from Neral that halts at Matheran railway station.

Malshej Ghat
Low hanging clouds, numerous waterfalls and overwhelming views of the Sahyadri mountain range characterise Malshej Ghat, a hilly getaway about 132 kilometres far from Nasik. Nicknamed as a “rain traveller’s abode”, it also pulls keen trekkers, nature worshippers and romance seekers. The rugged and rocky hills house forts, temples and ancient rock-cut caves from the bygone centuries. Make a pit stop at the roadside joints to savour the hot, smoked bhuttas, an unbeatable culinary treat on a cold and rainy day. The MTDC restaurant and hotel is a good stopover for lunch and accommodation. Bird watchers, take note: Malshej Ghat is an abode of colourful, feathered friends of different varieties; so be assured of spotting lots of birdies effortlessly. Travellers coming from Pune towards Nasik will reach Narayangaon and then after Alephata. These two places are good for a quick stopover. Grab a bite and get set for an enthralling ride through the winding roads that feature the majestic green carpeted hills of the Sahyadris.