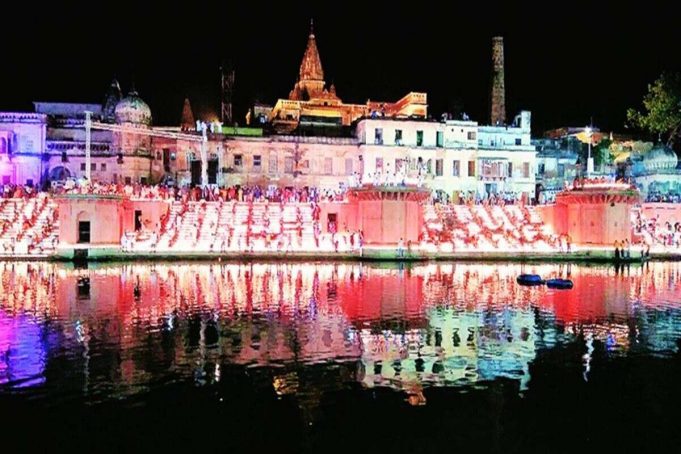 A luxury cruise ride to revisit the splendour of Ramayan! As the Yogi Adityanath government in Uttar Pradesh preps up to turn the Ayodhya into the biggest religious destination for Hindus, the centre is clearing the deck for the launch of Ramayan Cruise Tour’ on the holy city’s Saryu river.

The Ministry of Ports, Shipping and Waterways in a press release said that the Union Minister of State, Mansukh Mandaviya has chaired a review meeting for the quick implementation of the services. The cruise will give tourists a panoramic view of the newly built Ram temple, Ram statue and the Ram corridor.

Facilities and tourism plan of the Ramayan Cruise Tour
• The 80 -seater cruise will be facilitated with all kinds of luxuries, pantry and kitchen apart from safety and security features of the global standard.
• The interiors of the cruise will be designed according to the descriptions in the Ramcharitmanas.
• Large glass panels on the cruise will give way to the scenic beauty of the Sarayu ghats.
• The cruise will be built environment friendly with hybrid engines, bio-toilets.

The cruise tour will cover 15 to 16 kilometres on the Sarayu river during which an exclusively made feature film of 45 to 60 minutes will be shown to the devotees based on Goswami Tulsidas’s ‘Ramcharitmanas’. The play will cover the period of Lord Rama’s birth to his Rajyaabhishek (throning ceremony at Ayodha). The cruise will also have selfie points and several other activities that revolve around the theme of Ramayan. The tour will end with Arti at the ghats where the members will be able to participate.

The UP government has already announced large scale infrastructure works in the temple town from doubling of the railway line, modern sewage treatment plants to building an international airport. Works have already started for the construction of Satsang Bhawan, Dasarath Mahal, night shelter etc with an allocated budget of Rs 242 lakh, IE earlier reported

Importance of developing Ayodhya as a tourist destination
• Ayodhya is the birthplace of Lord Rama and hence is one of the most important pilgrim sites for Hindus
• According to UP tourism data, Ayodhya attracts more than r crore tourists every year that will rise after redeveloping the city.
• The ‘Ramayan Cruise Tour’ is expected to generate employment opportunities in the state, both direct and indirect.