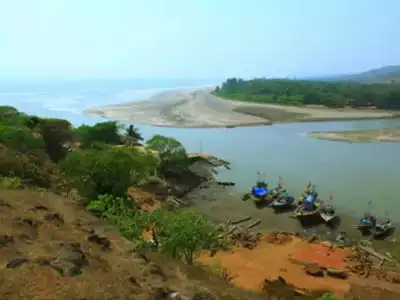 Dapoli is a small hill station in Maharashtra. The climate remains cool throughout the year. There are many forts, temples and caves which attract tourists. The weather here is cool throughout the year. Because of this Dapoli is also called Mini Mahabaleshwar. Many great personalities like Lokmanya Tilak, Sane Guruji, Dhondo, Maharishi, Keshav Karve and Paranjape have lived here. There are many beaches, heritage sites and historical buildings here. Apart from this, the sea foods here are famous for their delicious taste. This place is quite suitable for weekend weekends. Let us talk about some of the prominent places here …

Keshavraj Temple
This temple is a sample of Peshwa style architecture. The atmosphere here is quite peaceful. A short path leads to Keshavraj which passes through coconut, betel nut, mango and cashew trees.

The natural geyser is
also a hot water spring in which the smell of sulfur comes in the water. Actually this water passes through the underground pile of sulfur. It is said that this water has medicinal properties and can cure skin diseases. The dense forest nearby, the temple of Lord Shiva on the adjacent hill and the flow of water from a small river give this geographical area a lot of beauty. When you pass through Lamp Post

between Harnai Port and Beach
you will see the fort of Fatehgarh, Kanakadurga and Swarnadurga. The Harnai Lamp Post is the oldest and important light house on the entire Konkan coast. Standing near the lamp post, you can see the middle view and the ship anchored in the sea.

Ganesh Temple
There is a Ganesh temple in Anjarle village of Dapoli taluka called Kadivarcha Ganapati. Anjarle is a small port at the mouth of the Jog River. The Ganesh temple here is quite famous in the entire Konkan region. This temple was built in the 12th century. Since the year 1630, the ‘Nischer’ family has been working for this temple. The stone steps are made to reach the temple situated at the height. From there you can see the Arabian Sea, Suvarnadurga Fort Harnai and a dense coconut plantation.

How to reach
Dapoli You can go by air, rail and road, all three routes.

By Air: Ratnagiri Domestic Airport is the closest airport which is 127 kilometers from Dapoli.

Rail route: Khed railway station is the closest station which is 29 kilometers from Dapoli.

By Road: It is also very convenient to go to Dapoli by road. Dapoli is about 220 km from Mumbai and about 185 km from Pune.