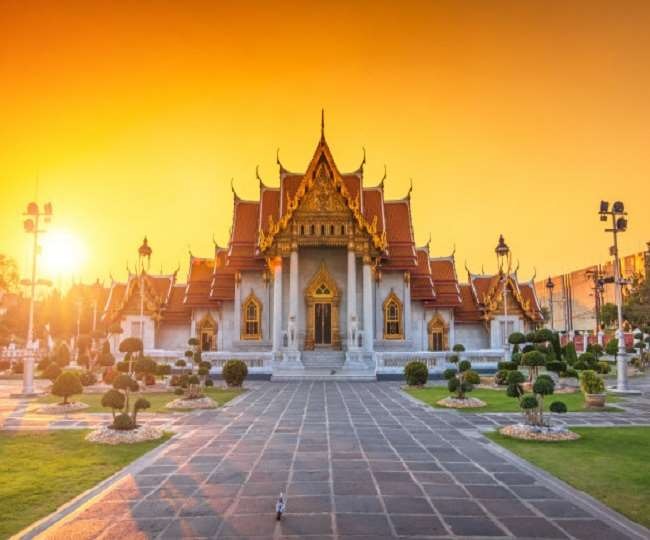 New Delhi, Lifestyle Desk.Gautama Buddha was born in 563 BC, home to the Kshatriya king Shuddhodhana of the Ikshvaku dynasty. His mother’s name was Mahamaya. Just 7 days after his birth, his mother had merged with the five elements. After this Buddha was raised by his aunt Ji Mahaprajapati Gautami. Gautam Buddha was a person of spiritual instinct from childhood. Because of this, Gautam Buddha became a monk at the age of 30. After years of penance, Gautama Buddha attained enlightenment under the Bodhi tree at Bodh Gaya. Since then people started calling him as Lord Buddha. At that time Buddhism was confined to India and Nepal only, but Emperor Ashoka tried to spread Buddhism all over the world. In modern times, not only India and Nepal, Rather, worship of Lord Buddha is worshiped all over the world including Asia. For this, a large number of people come to Bodh Gaya, Bihar, the place of knowledge of Lord Buddha and see Lord Buddha and get his blessings. If you too are planning a religious visit and want to see Lord Buddha in the country during the Corona period, then you can visit these places-

Bodhgaya, Bihar
Bodhgaya is the holiest site for people who believe in Buddhism. It was at this place that Lord Buddha attained enlightenment. Therefore, this place is very sacred. Even today the Bodhi tree temple is located in the courtyard. However, it is a fourth generation tree. According to the historians, an attempt was made to destroy the Bodhi tree twice. At the same time, it was once destroyed due to natural disaster. This temple was built by Emperor Ashoka. You must visit Bodh Gaya to see Lord Buddha and receive his blessings.

Sarnath Temple, Varanasi
It was at this place that Lord Buddha preached for the first time. Hence, it is a sacred place for people who believe in Buddhism. This temple was also built by Emperor Ashoka. There are also Chaukhandi Stupa, Moolagandha Kuti Vihar, Dhemakh Stupa and Dharmarajika Stupa.

Mahaparinirvan Temple, Kushinagar
There is a Mahaparinirvana temple in Kushinagar in the state of Uttar Pradesh. The temple has a 6 feet tall statue of Buddha, which is always covered by a chunari. Only the face of the idol is visible. This temple is a sacred place for the visitors of the country and abroad, because in Kushinagar itself, Gautama Buddha merged into the Five Elements. Swami Haribala, a disciple of Lord Buddha, has done a grand construction of the temple with red sandstone. You must visit Mahaparinirvana temple to see Lord Buddha.