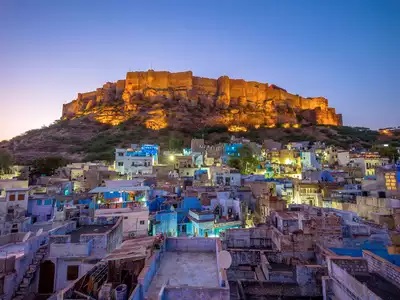 The name of Jodhpur was also included in the 15 most visited places of the world . It is a matter of pride for the whole of India that it is with the people of Jodhpur. Jodhpur is the second largest city of Rajasthan . The city is nothing short of a visual treat for architecture and history lovers. This city is a favorite not only of India but also of international tourists. A number of schemes for the development of Jodhpur are under development, which will soon add to the charm of the city.
the lines of the Jojari River Front Sabarmati River Front, the project of world class river front is also being prepared in Jodhpur. There are many challenges for this. Such as preparing large drains to bring water to the Jojri river in Banad. By making 100 fitki roads near the railway line from Saran Nagar to Banad and connecting it to Jaipur road so that traffic is not affected.

Beautification of Kayalana The
road will be constructed around Jodhpur to beautify Shan Kayalana Lake and attract tourists. For this 6.5 km of road will be constructed, most of the land is under forest department. The consultant is being appointed soon for this scheme of 25 crores. After this, adventure like parasailing, speed boat, water scooter will also be started.

Do you know why Jodhpur is called Blue City?
Jodhpur is the second largest city of Rajasthan. The city is nothing short of a visual treat for architecture and history lovers. This city is a favorite not only of India but also of international tourists. It recently occupies the 16th position on the 2020 travel list of The New York Times. There is so much to do in this city from walking, shopping to eating. However, very few people will know that it is also called Blue City. Know the reason for this as well as what you can do here.

Open Air Theater:
Civil construction of the open air theater is to take place in Samrat Ashok Udyan. Administrative and financial approval has been given for this. According to officials, a world-class theater will be built. Where folk culture will be represented for tourists. There will be a display of Rajasthani and Hindustani art.

Beautification of the gardens:
Around Rs 7 crore will be spent for the beautification of the city’s two main hope and Mandore gardens. The Umaid Udyan will cost Rs 2.5 crore under the Amrit scheme. Similarly, the development of the historic Mandore garden will cost Rs 4.82 crore. About 50 thousand foreign tourists come here every year. Musical and illuminated world-class fountains will be installed here. On the same lines, a musical fountain will also be constructed at Man Sagar Park at a cost of Rs 1.24 crore.

Elevated Road
9 km elevated road from Mahamandir to Akhalia Square. The plan is being prepared to reduce the increasing traffic in the city with the possibilities. According to a senior official associated with the project, the elevated road will have such a scope that in future the metro will also be able to pass through. The DPR for this project of one thousand crore rupees is being prepared.