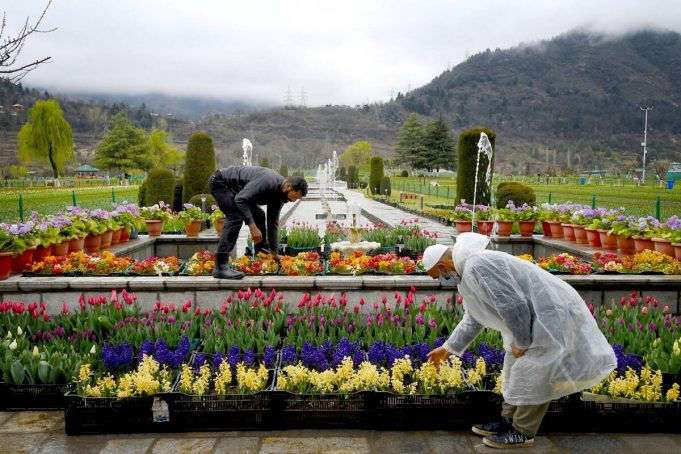 Formerly known as Siraj Bagh, the Indira Gandhi Memorial Tulip Garden was opened in 2008 by then chief minister of erstwhile Jammu and Kashmir state Ghulam Nabi Azad.
Tulip Garden all set to reopen in Srinagar
Gardeners check flowers, a day before the opening of the Tulip garden, in Srinagar. Cold weather conditions, spells of rain and snowfall have delayed the blooming of the flowers.

Srinagar: Asia’s largest tulip garden overlooking the famous Dal Lake here in the summer capital of Jammu and Kashmir was thrown open to the public on Thursday, marking the beginning of the new tourism season in the valley.

The idea of the garden, spread over 30 hectares in the foothills of snow-clad Zabarwan range, was conceived to advance the tourism season in the valley by two months.

Advisor to the Lieutenant Governor, Baseer Khan, declared open the mesmerising tulip garden for all visitors.

While praising the beauty of the place, Khan said that Jammu and Kashmir is endowed with beautiful natural landscapes, which have huge potential for tourism.

He said earlier tourists were visiting other world famous gardens and places of Kashmir, but now the tulip garden has become an iconic destination and attraction for them.

On the occasion, the advisor informed that Lieutenant Governor Manoj Sinha will inaugurate six days Tulip Festival on April 3 when the garden will be in full bloom.

He said that during the festival, display of rich tradition, culture, cuisines and crafts on the stalls will be set by concerned departments so that tourists will become familiar with rich culture and values here.

Khan stressed on the visitors to follow COVID-19 standard operating procedures strictly to avoid any chance of the spread of the virus.

He said the district administration has put various measures to contain the spread of the virus and also issued guidelines on the same.

Khan elaborated that ornamental plantation has been carried out at the backside of the garden towards the mountain foothills and added that the government has undertaken Rs 10 crore project for the stage-2 of the tulip garden and the work is in progress.

Prime Minister Narendra Modi on Wednesday set the tone for the tourism season of Kashmir as he tweeted about the opening of the garden.

“Tomorrow, 25th March is special for Jammu and Kashmir. A majestic tulip garden on the foothills of the Zabarwan Mountains will open for visitors. The Garden will see over 15 lakh flowers of more than 64 varieties in bloom,” Modi tweeted.

He appealed to the people to visit Jammu and Kashmir to experience the Tulip Garden and the warm hospitality of the people of the union territory.

“Whenever you get the opportunity, do visit Jammu and Kashmir and witness the scenic Tulip Festival. In addition to the tulips, you will experience the warm hospitality of the people of Jammu and Kashmir,” Modi said in another tweet.