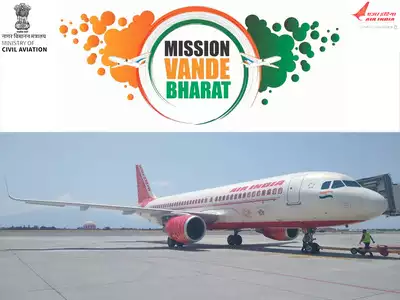 Air India operated under the Vande Bharat Mission is reported to have reduced the fares of rescue flights. So far, the fare from the US to Delhi was around one lakh rupees. It has been reduced to about 75 thousand rupees. The highest traffic is being recorded in this sector so far. Similarly, flights to Delhi from London, Canada and other countries have also been reduced. Apart from the economy, fares for business and first class have also been reduced.

The reduced fares will be applicable for Vande Bharat Mission Phase-4 starting July 3. A total of 16 take-offs from India took place under this phase on 3 July. It had the highest number of flights to nine countries from IGI Airport in Delhi. While six took off from Mumbai and one from Chennai. It all took off for Toronto, Washington DC, Newark, Chicago, New York, Nairobi and Colombo etc.

Sources said the reduced fares will be valid for both sides. That is, those who are coming to India from America and those who are going to America from India. They will be able to get reduced fare tickets. Sources say that the new scheme will be applicable not only to Delhi but also to Air India flights operating from all other cities of the country. Air India sources did not give reasons for reducing the fare. But some people are believed to have raised questions about higher fares. Perhaps this is why fares have to be reduced.

Air India will bring Indians from 17 countries
Air India will operate 170 aircraft from 17 countries from July 3 to 15 under the fourth phase of the Vande India Mission. The government started this mission on 7 May to return Indians stranded abroad. The international passenger flight service in India has been suspended since 23 March due to Corona virus infection and will continue till 15 July at present. According to an Air India document, in the fourth phase of the mission, airlines from India to Canada, USA, UK, Kenya, Sri Lanka, Philippines, Kyrgyzstan, Saudi Arabia, Bangladesh, Thailand, South Africa, Russia, Australia, Myanmar, Japan, Ukraine and Vietnam Will operate 170 flights connecting to