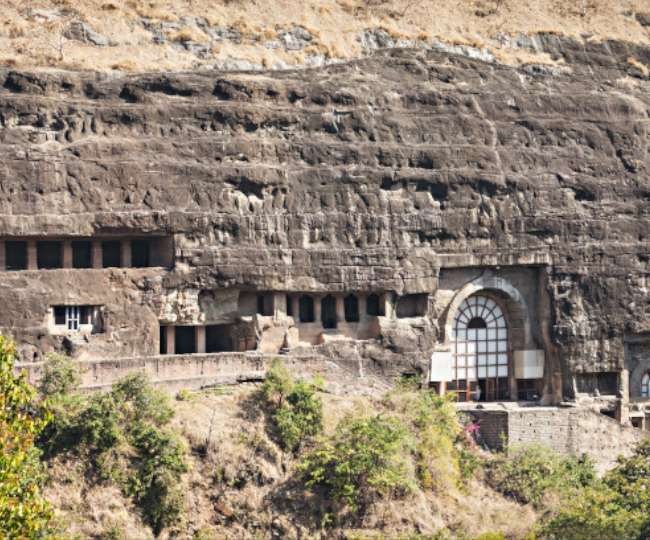 The caves of Ajanta are 56 meters in height and span a range of 550 meters. Cave number eight is the lowest and Cave number 29 is situated on the top of the mountain. There are 29 caves in total. Among them, cave numbers 9,10,26, 29 are like places of worship, while the rest are famous for viharas.

It can be reached directly from Central Railway station Bhusaval or Jalgaon. The distance of Ajanta from these stations is 70 km. Is approx. The other route comes through Aurangabad. The distance of Ajanta from here is about 101 km. is. After reaching the Ajanta valley by CNG buses and climbing about 70 meters, it was the detail before the eyes which had brought us here. The doors of the caves spread in the horseshoe-shaped expanse in the hills surrounded by greenery and tall trees were now visible to us. These caves have been built by cutting rocks on the banks of the Baghora river, which now only has water during the rainy months. These caves are carved into a giant valley by carving shilakandha, a unique example of early Buddhist architecture, cave painting and sculpture. Maurya, Vakataka, These caves were built in different periods of the Rashtrakuta dynasties. In 1819, John Smith, an English hunter, discovered them.

Caves are divided in number

We first encountered cave number one. Being a Buddhist vihara, everyone was asked to take off the shoes outside the cave itself. It was dark inside the cave. Cave number one is a large hall built on twenty pillars. Paintings have been done on the walls and roofs of the entire hall. To see this painting, a flashlight is necessary. This ticket can also be rented by paying a few rupees from the window. Without this, it is not possible to see pictures.

Just in front of the entrance of the cave is a huge statue of Buddha made by cutting the wall. The Buddha statue is present in various postures in almost all the caves. The construction of Ajanta caves lasted for nearly four centuries. The excavation work took place under the rule of the Vakataka kings. The last 50 years of the fifth century and the early 50 years of the sixth century are considered the golden age for sculpture and painting. This was also the time for Ajanta’s excavation. The work slowed down by the seventh century. The construction of many caves remained unfinished. It seems that their builders lost their economic power or lost their political power. However, Ajanta’s work appears incomplete in many places.

The design here and especially seeing the huge halls of the caves number 26 and 16, seems to be a huge center of Buddhist education. These halls may have been used as an administrative activity. The structure of Cave 26 is such that all the caves could be monitored by standing in front of them. Some rooms in these caves are also made for sleeping. Most of the caves have small rooms for meditation. The size of these rooms vary. Clearly, they must have been made based on the importance of their users. In Ajanta, the tourism department has deployed a staff in every cave. Their job is to inform the tourists about these caves. But not one of them is ready to open his mouth without any donation. Even in most of the caves there is no arrangement of light. Ajanta’s opulence was scattered in front of us. Ajanta was jealous after seeing Ajanta connected to the city of Taj.