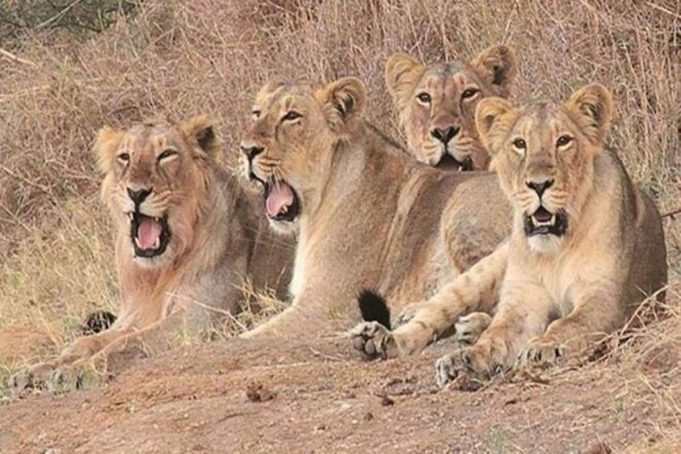 Both the Wildlife Sanctuary and the Interpretation Zone had been closed for tourists on March 21 this year due to the state entering into a lockdown.

Lion Safaris in Gir: The Gir Sanctuary and two lion safari parks in Gujarat have been reopened for tourism after remaining shut for a long time due to the coronavirus pandemic-induced lockdown. However, tourists are yet to return. According to a report in IE, forest officials have said that even the Diwali festivities permit slots have not been booked. For the residents of the forest-surrounded village Sasan, who depend on tourism to earn their living, the lack of tourists is worrisome.

Gir National Park and Wildlife Sanctuary opened its tourism zone for tourists on October 16. The Gir Interpretation Zone opened up for tourists in the beginning of the month. The interpretation zone is divided into two safari parks – the Devalia safari park near Sasan in the west wildlife division, and in the east wildlife division near Dhari as Ambardi safari park. The three tourism spots had been closed on March 21, after Gujarat went into a lockdown to prevent the spread of coronavirus.

The report quoted Junagadh wildlife circle’s Chief Conservator of Forests (CCF) Dushyant Vasavada as saying that so far, the response from tourists has been lukewarm, with less than 500 safaris having taken place in these three areas since the beginning of the season. This, even when Diwali festivities permits were available.

The tourism in Gir in October-November usually remains the highest during the Diwali festivities. Apart from this, the months of April and May are also important as the summer vacations bring major tourist footfall. However, the tourism earning opportunity during April-May was lost due to the pandemic, and the picture looks bleak for Diwali as well, since the booking for the permit is yet to pick up pace, the report added.

The report further quoted Vasavada as saying that due to the pandemic, people might be choosing to remain at home. However, he said that they have now allowed elderly tourists as well as children under the age of 10 to visit, and hoped that the lifting of these restrictions would help in improving the tourism.

Normally, the Gir National Park and Wildlife Sanctuary’s safari operates between October 16 and June 15 and remains closed during monsoon, while the two safari parks are open throughout the year. As many as 5.23 lakh tourists had visited Gir last year to witness the Asiatic lions.

The forest department can approve 150 tourist permits daily, but at present less than 10% are being booked. The report quoted Gipsy Owners Association president Khimji Sandera as saying that they are conducting about five safaris each during the morning and evening. The total number of safaris from Sasan since the resumption of tourist activities has been about 75, Sandera added.

Sasan is a village in the Junagadh district and is the headquarters of the Gir National Park and Wildlife Sanctuary. Sandera said that many of the village residents have purchased gypsies for safaris by taking bank loans, and now, due to lack of tourists, they are finding it hard to pay the instalments.